My name is Sabir Ibrahim Aglain. Originally I come from the Nuba Mountains; from the Ama area (Nyimang) north-west of Dilling to be more specific. The Ama area consists of eight localities: Silara; Kilara; Tundiya; Kurmtei; Nitil; Hagar Sultan; Fassu; and Kakara. Ama is the name of the language we speak. It is a Nilo-Saharan language that is also spoken in Mandal and Affitti.

In Februari 2005 I returned to this area for the first time in eleven years. It was fascinating to go to Amada, as the Ama people call their homeland. Just the word: AMADA, evokes a magical and nostalgic sentiment to the people from the area. Going to Amada was like a trip to a distant past. There were hardly any changes, except that many people have left. I went to Kilara where my father originates from and to Kurmtei where my mother was born. I visited my aunts in Tundiya and Silara. 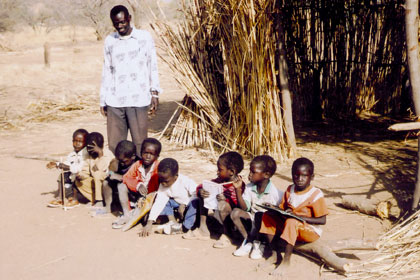 The school you see in my photos is located in Alkook, which is about 4 to 5 kilometer from Silara but it is still part of it. The place is rather obscure, even to many Ama, but it has gained a reputation because many people from Alkook joined the Sudan People’s Liberation Movement. They have now established some sort of community centre here.

Amada has a severe problem of clean drinking water. Outside the rainy season there is a shortage of water for the people and for their animals. Many wells have been filled in and most of the water pumps have broken down. People are always looking for solutions to this problem. A few years ago they built a dam in Silara-Funie for example, to collect the rainwater. The results are hardly visible though. I don’t know why the project failed. Another example is a dam built near Kurmtie last year, for the same purpose. The first results were disappointing; they say it is because of technical flaws in the design. They are still busy making the necessary changes.

Health care is another problem. The entire Ama area has one clinic in Tundiya and it lacks about everything. When I visited in 2005, the people in Alkook were trying to establish a new clinic. What has become of it? I don’t know. Education is another sad story. The Ama were among the first Nuba groups to recognise early on the importance and value of education. The large number of educated people from this small area testifies to this mentality. Today, however, the schools are faced with a complete lack of means.

Despite all these setbacks, people work hard to improve their circumstances. There is a strong sense of optimism and life goes on. Right now, many people return to the area. Ama’s will never abandon their homeland, the love for Amada is deeply rooted in their hearts. The history, the beauty, and the spiritual value of the Ama area is immense; it will not vanish just like that as you can hear in many recent Ama songs. They are meant to motivate people to return to their homeland.

The Ama are becoming more aware of the meaning of Amada, and educated Ama especially are increasing their contribution to the development of the area. It gives a great deal of hope for the future.

The Nuba Mountains Homepage was made by Nanne op 't Ende.
You can contact me here.