Medal Parade in the Nuba Mountains, in Sudan

A unique gathering of Sudanese and internationals supporting the CFA and a lasting peace. 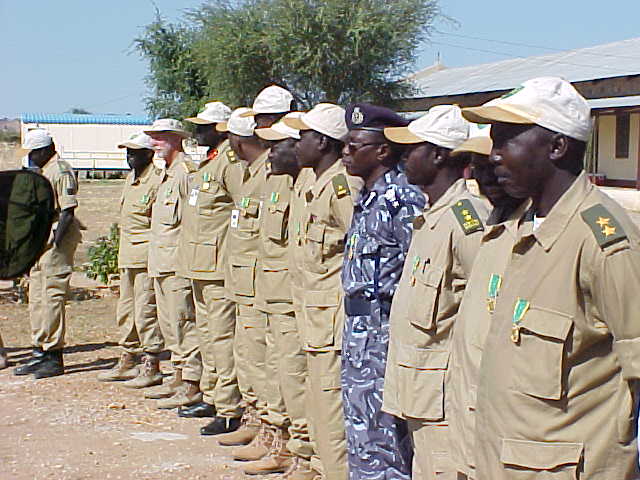 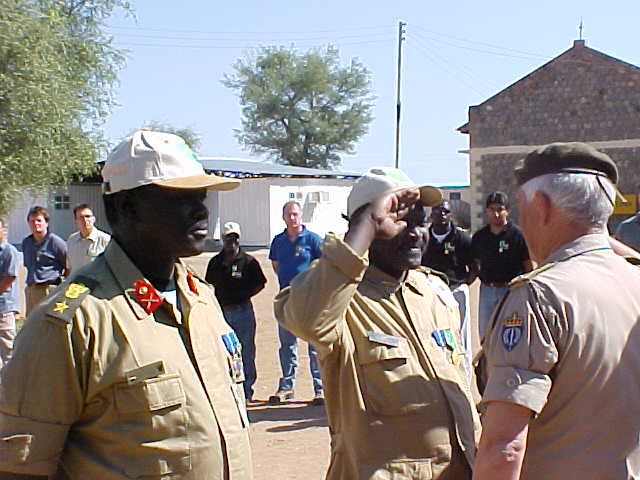 In Sudan, the 'Nuba Mountains Cease-fire agreement' (CFA) holds since about eleven months (without any casualties). This agreement was signed in Burgenstock, in Switzerland, on January 19th, 2002, between the Government of Sudan (GOS) and the Sudan's People Liberation Movement/Nuba (SPLM/Nuba). The CFA was prolonged by the Parties till January 19th 2003.

The Joint Monitoring Mission (JMM) and the Joint Military Commission (JMC) is the international body supervising the implementation of the CFA. It is composed of internationals and of representatives of the GOS and of the SPLM/Nuba. (but it is not a UN mission).

The Friends of Nuba Mountains is the political body supporting the JMM/JMC work; it is composed of some diplomats based in Khartoum, representing the countries sponsoring the Mission (eight European countries, Canada and USA).

The Head of Mission and Chairman of the Joint Military Commission is Brigadier-General J.E. Wilhelmsen, from Norway, supported by the COS Col. P. Stamps, from United Kingdom.

Arriving close to the end of the second mandate period of the Mission, the HoM decided to give a unique opportunity to the representatives of both Parties, the Friends of Nuba Mountains and mission members to gather, on the occasion of a Medal Parade, in which persons who have served and/or supported the Mission will be rewarded.This event took place in Kadugli on December 15th, in the JMM/JMC Headquarter.

The approach of the JMM/JMC mission has been (as mentioned hereabove), through the everyday integrated monitoring team work, of internationals, GOS and SPLM/Nuba observors, which proved to be a determinent factor to the holding of the cease-fire.

However, it was the first time that both Parties gathered publicly in Sudan, with the Friends of Nuba Mountains representatives, and the media.

In a unique event, internationals, GOS and SPLM/Nuba monitors were on Parade; they came from the various sectors of intervention of the JMM/JMC (Dilling, Julud, Kauda, Umm Sirdiba). More than twenty Sudanese monitors (from both Parties), received the Joint Monitoring Commission, Nuba Montains Medal, in acknowledgement of their support to the `Nuba Mountains Cease-Fire Agreeement’ and their dedicated service.

Participants of both Parties and guests used this occasion to have discussions, others to give interviews. The atmosphere coming out of the gatherings confirmed the good will of the Parties to reach peace and a comprehensive settlement; but also it confirms the political and humanitarian support by the Friends of Nuba Mountains (countries); this for the benefit of a bruised civil society, which (on both sides) regularly confirm its strong support to the cease-fire. The civil society regularly expresses the wishes that the humanitarian and reconstruction support would increase soon, and that a comprehensive and lasting peace would come for the benefit of all.

It is indispensable that all the decision makers will support their demands.